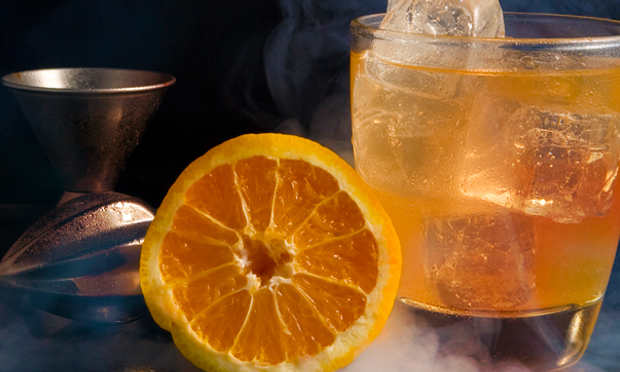 It’s pretty hard to miss the pumpkin craze going on, it’s in everything from coffee to butter right now, so I took it upon myself to find out the best recipe for pumpkin infused vodka. With a couple tweaks and a couple pumpkins, here is my ultimate spooky pumpkin cocktail, Just in time for halloween!: 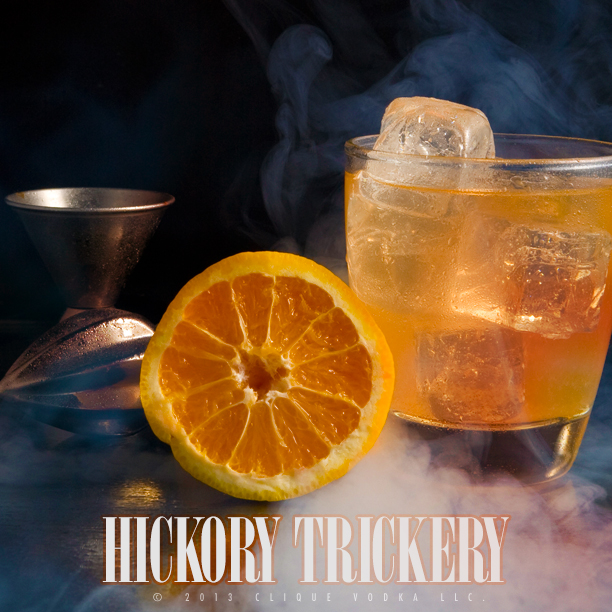 To make the main ingredient,  pumpkin infused Clique Vodka, you’ll need a small sugar pumpkin (sometimes called a baking or pie pumpkin).  Cut it in half,  remove the stem,  seeds and stringy bits,  then place the halves flesh side up on a baking sheet,  and sprinkle with a mixture of 1 cup brown sugar and 1 tablespoon of pumpkin pie spice.  Bake in a 400 degree oven for about 20 minutes, or until soft.  Let the pumpkin cool before cubing the flesh and add to a large glass infusion tank,  jar,  or pitcher with 2 bottles of Clique Vodka and 1 split vanilla bean (cut it right down the middle and spread the halves out to reveal as much surface area as possible).  Stir the infusion a few times a day for about 3-4 days,  or until the Clique Vodka has turned a brilliant orange color and smells sweet. Strain out the pumpkin cubes and get ready to stir up some trickery!

To make the “Hickory Trickery” cocktail,  add 1 1/4 oz pumpkin infused Clique Vodka to an empty bottle and fill with hickory smoke using a smoking gun.  Shake the bottle a few times to infuse,  then pour the smoked pumpkin vodka into a short glass with ice,  and add 1/4 oz simple syrup (1 part sugar dissolved in 1 part hot water) and 2 oz fresh orange juice.  If you want to make up a pitcher of trickery, smoke the pumpkin infused vodka first,  then add it to a pitcher with a lid or small opening at the top along with the simple syrup and oj. You can then top the whole batch of with a little more hickory smoke, and it will spill out as you pour the cocktails for a delightfully spooky Halloween presentation!

If you want to try out more smoked cocktails for Halloween, check out the “Smoked Blackberry Sour” and “Fired Up” from the MixBook!